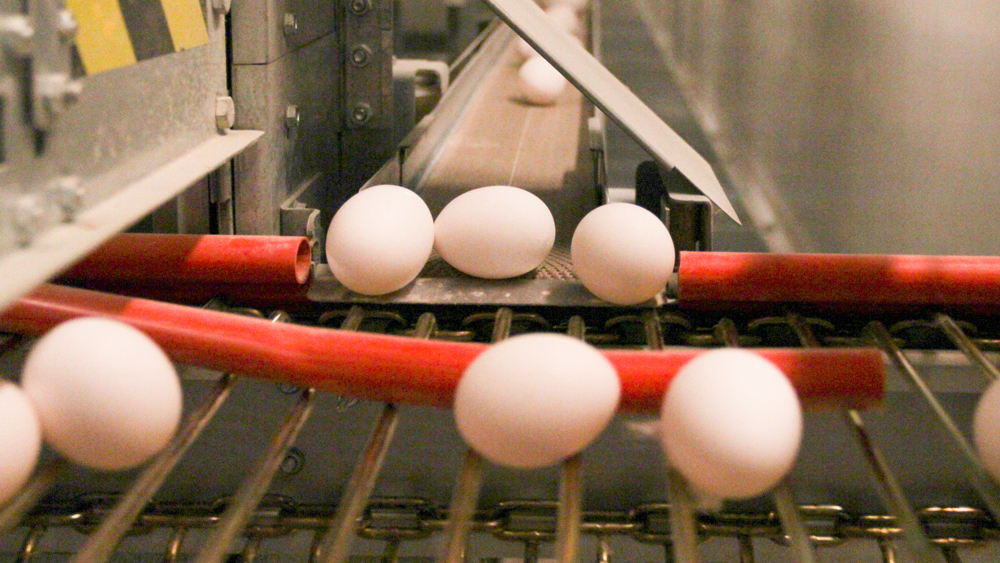 Egg farming in Canada began around the mid 19th century. Eastern influence contributed much to the implementation of the system, as chickens and other poultry were brought into the country from Europe. Hens were then used to lay eggs as a means of feeding the family, and any extra eggs were sold at local markets for supplementary income. It was done under a backyard system, and was not a primary source of income for any farmer at the time. Canada’s extreme climates made it very difficult to raise poultry as predators and internal pecking orders reduced the mortality rate of hens significantly. As time passed, and this type of production deemed more profitable, research was done around the mid 20th century regarding indoor living. A change such as this could allow farmers to ensure healthy eating habits, provide sanitary living, and reduce the internal conflict derived from the hierarchical system known as pecking orders. The pecking order is determined through aggressive birds asserting their dominance by pecking smaller, weaker chickens. By the early 1960s, certain technological innovations were made. Farmers could improve the health of hens, increase egg yield, and improve industrial automation. It was these technological advances that helped propel early egg production into the commercial operation it is today.

The life of an egg-laying hen is quite simple; they are bred to be able to produce healthy, non-fertilized eggs for consumption. The egg-laying process for a hen begins at around 18 weeks of age, when the female produces its first egg and is officially given the title of layer. Thereafter you can expect an average of 200-300 eggs per year while they are at their peak egg laying production. To promote this type of production, farmers provide the hens with optimal living conditions that we will discuss in detail later in the article. Different breeds of chickens yield different egg production performance, providing farmers with another variable for consideration. When it comes to laying hens, the best breeds are White Leghorn, Plymouth Barred Rocks, Rhode Island Reds and Blue Andalusians. Each breed produces different size and coloured eggs at varying rates. The life of a broiler chicken is quite different from its egg-laying counterpart. For one thing, layers are females, whereas broilers can be either male or female. Broiler chickens are reared for obtaining meat and thus are bred in conditions that promote fast growth. There is a great amount of care and attention that must be provided to a broiler chicken, as they require a great amount of nutrient dense feed and thorough monitoring of all activities due to their fragility. This is where an egg-laying hen can be beneficial for farmers who aren’t looking for an investment that is too labour intensive. The feed requirements are not as expensive compared to broilers, and there is much less work required concerning the monitoring of the physical attributes of each bird.

There are changes and optimal practices that farmers can put in place in order to encourage healthy egg laying in their hens, and that is what we are going to transition to:

Farming Practices For Healthy Eggs
Egg farmers have many tools available that they can utilize in order to get the most out of their egg-laying hens. The three most prominent variables to consider carefully are:

Effective light management is crucial for egg-laying production, as artificial lighting has become a tool to help increase the performance of a flock, improve welfare, and increase production. Growth and reproduction are responsive to light energy and this affects the health and production of eggs. The optimal lighting wavelength seems to be 630 nm for an egg-laying hen, as it has shown to increase production of egg-layers. The duration, of which the hen is exposed to the light to yield the most optimal results has been tested vigorously over the years and is still being conducted to this day. Once Lighting has a great article on The Science of Layer and Breeder Lighting.

A balanced diet is essential for egg-laying hens, as nutrient deficiencies can have an adverse have an adverse effect on the production and health of eggs. As previously discussed, egg-layers and broilers have vastly different diets catered to their specific needs. The differences are in the amount of food provided and the specific nutrients that are in the feed. We have discussed the feed requirements for broilers; egg-layers on the other hand are fed a high calcium diet for healthy eggshell production and at a much smaller amount. It is in the farmer’s best interest to provide high-quality, enriched feed for their flocks. With less stress put on the birds from nutritional deficiencies, hens are able to lay fresh eggs at a much more consistent pace.

The more important variable impacting a hen’s ability to produce healthy eggs are their living conditions. This has been a topic of much controversy over the years, and farmers are dedicated to improving the welfare of animals within their facilities. This is mutually beneficial; as farmers will yield healthier more productive flocks and the welfare of those flocks are improved as well. Characteristics of the facility that are important for healthy production are adequate space, perches, scratching pads, and other amenities that allow for natural bird behaviour.

Most of the factors we have already discussed contribute not only to the health of the eggs hen’s produce, but also the consistency in which they produce them. In saying that, there are some reasons that a hen might not be producing consistently we have not discussed.

Fresh, clean water is essential for a healthy flock of hens. Drinking water encourages the hen to eat food, and thus will rear a better producing bird. A properly functioning water system should be put in place to ensure that the water is at an appropriate temperature; too cold and the water will freeze, too warm and the hens will not drink it. Just like humans, water is essential for the life of an egg-layer.

Monitoring any disease or parasite infestation is crucial to ensuring consistent egg production within a flock. Diseases can put stress on the hen and decrease production, and parasites can cause damage to their digestive tract. Any health problems will of course bring upon performance issues, so it is in farmers best interest to ensure the health of their hens is a top priority.

Egg production remains a highly profitable career for any farmer. Canadian farmers are always looking to create better environments for their poultry and adhere to the national standards that will increase the welfare of their chickens. The industry has come along way, and Canada has every intention of ensuring the life quality of hens and the profitability for egg farmers simultaneously improves.

For further information, see our Ruby360 Solutions for Egg Production.